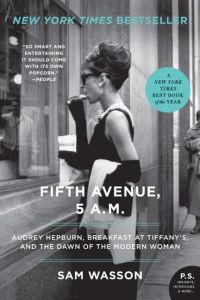 What we learn in this deceptive hint of film history by author Sam Wasson isn’t the factual making of Breakfast at Tiffany’s – though that does hold in and of itself many cultural themes, but the culmination of a character’s transformation. That character is Audrey Hepburn, and no other word can possibly describe her better than “character”.

By recounting the midcentury lives of Hepburn, author Truman Capote, director Blake Edwards, and all others players associated with Breakfast at Tiffany’s, Fifth Avenue 5 A.M. disseminates the cultural impact of the feminine image and how it affected the ultimate tone of the film. 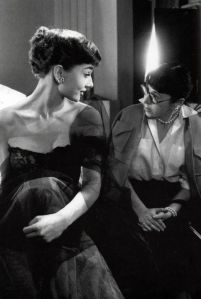 Wasson’s book is sociological – touching on the cultural gaze of the motion picture gaze through the era. We start with the world of blonde bombshells – of Monroe, Mansfield, Bardot – and the peculiarity in the essence of Audrey Hepburn. She was tall, gangly, nimble, demure. To make Hepburn a star, the filmmakers behind Roman Holiday tried hiding these attributes, utilizing the expertise of Edith Head to minimize the swan-like neck and the petite waist that would so define Hepburn’s elegance later on. There were also attempts to make Hepburn into a new kind of symbol that would attract the mainstream audience. For the first time, the film industry thought up the “good girl princess” – and they decided to test the persona on Hepburn.

By taking us into the daily lives and thoughts of the players surrounding Audrey Hepburn’s rise, Wasson’s prose recalls the form of Erik Larson with its novelistic style and courage to mock up inner thoughts. Whether these moments (such as a scene of Billy Wilder hiding in a closet) were true or fictious may be beyond validation, but the spirit is there, and so Wasson finds a delightful way to tell a story over a hardened dissertational monograph. 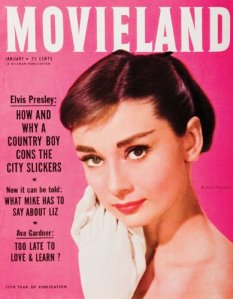 In the end, the Swinging Sixties through more than enough caution to the wind to allow Hepburn her very first chance at subverting the very tropes that defined her. With Roman Holiday, with Sabrina, with War & Peace and Funny Face, Hepburn had become a movie star – and then Breakfast at Tiffany’s came, transforming the rising popularity of her original fashion into total, all-out style iconography. Plain and simple, she became the very definition of elegance, and all those gawky traits once thought a detriment to her career suddenly became the norm.

Fifth Avenue, 5 A.M. is a delightful, beachside read. It plays out in vignettes, calling forth scenes and criss-crossing between little moments that build and shape the modernity of Hepburn. It paces itself easily and never halts in the whimsy of its prose.