“It is a tragedy it is unfinished…. It has a kind of wisdom in it, and nobody ever penetrated beneath the surface of the movie world to any such degree. It was to have been a very remarkable book.”
— Maxwell Perkins

What might’ve been had its great author lived to complete this novel, we’ll never know. F. Scott Fitzgerald was many things, but a Hollywood hack, he was not. His friend Billy Wilder once claimed asking Fitzgerald to write a script was akin to “a great sculptor who is hired to do a plumbing job.” An apt comparison can be made to a line of dialogue in the novelist’s magnum opus where Nick Carraway says to Jay Gatsby, “You’re worth the whole damn bunch put together.”

The Love of the Last Tycoon is that could’ve-been-great unfinished novel based on the life of Irving Thalberg that tells a tale of Hollywood romances through the eyes of a boy wonder haunted by love and loss. Monroe Stahr is confident and charismatic, if not a little unorthodox, and his squabbles with studio boss Pat Brady – an arena which transforms Hollywood business into gladiator matches – seem evermore life or death.

There is a plot to the story, if you read the author’s notes, though novelistic it may be, Fitzgerald’s time in Hollywood is apparent. The story succumbs to the intrigues, the twists, turns, and reveals susceptible in movies. During his days in Paris, he once told a shocked Hemingway he wrote his short stories as he normally would before adding in twists and turns that would make them sellable. The Love of the Last Tycoon has that feeling to it, and perhaps that desperation drives the drama in the text.

Yet still sumptuous in prosaic poetry and dripping with symbolism, every moment in the book is up for interpretation. As it is unfinished, we’ll never know what any of it could possibly mean, but that ambiguity lets us debate Fitzgerald in a way we couldn’t in the past. We know that yellow is a symbol of wealth in Gatsby and the green light represents hope, but how does Andrew Jackson’s estate inform Cecelia Brady, and what is the reason for the confrontation between Stahr and the Communist? 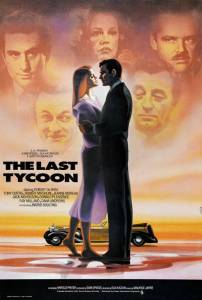 Monroe Stahr is a truly fascinating, albeit underdeveloped, character who can be determined an anti-Gatsby. He has worked hard in achieving every single success, he is respected by peers and superiors, and he had successfully loved and outlived the woman of his deepest desires. Whereas Jay Gatsby’s ill-chosen decisions resulted in his demise, Stahr’s end comes not as a tragedy of destiny, but as a total unrelated fluke. As always, Fitzgerald creates mysticism that surrounds the actions of his protagonists and Stahr certainly lives up to that canon of mythology.

The Love of the Last Tycoon is not a celebration of Hollywood, nor is it a condemnation of its business practices. In its ultimate state, Fitzgerald didn’t seem to attempt a history of show business, but merely a record of its external facts. The tone is non-judgmental, aspirational, and ever-so-often, deeply hopeful – the last foundation of its author’s ideals.

One thought on ““The Love of the Last Tycoon” Book Review”